Check out some new posts at www.thisisthedaycoudray.wordpress.com

I decided to start a blog to help document this new adventure of parenthood and thought I'd start with Eli's birth! It was so helpful to hear about other people's experiences while preparing ourselves for this big event. I'll have to dedicate another post to my pregnancy: We moved across the country 3 times (traveling through 26 states in the process.) 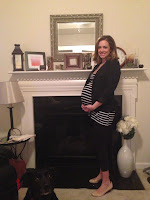 By the time we got to our final destination (Suffolk, Va) I was 6 months pregnant. We had originally discussed doing a natural labor but hadn't researched it much yet. I had heard about the book "The Bradley Method" and bought it for Aaron to read. He loved it and had me read it next. I HIGHLY recommend every pregnant woman read this book, whether or not you are interested in natural labor. There is way more information about the labor and delivery process in the book than you'll get in any childbirth class. There is a really great blog that summarizes the book here.

Reading the book, however, is how we decided to commit to a natural birth. I want to stress how important it was for us to have a "birth plan." Almost every time we told someone that we wanted to "go natural" I was told not to plan for anything because you never know what could happen. I totally agree that anything can happen and the majority of women do not get the birth they set out for. However, we were very blessed to get EXACTLY the birth we wanted. I do think a big part of that were the exercises and preparation from the Bradley Method. We were unable to attend the classes since we found out about it too late, but would love to do them for the next one. The book outlines different exercises for each week and stage of pregnancy to make labor quicker and easier. Labor is a major physical event for your body, so I liked the idea of being as prepared as possible. The other thing I loved about the book was getting detailed descriptions about each stage of labor. This helped me feel in control and ready for for each stage as it came. I was TERRIFIED of labor and reading so many success stories about natural labor was very encouraging. Having Aaron on board and so encouraging about his faith in me and my body was imperative to our success. I only had one fleeting moment of "holy crap I dont know if I can do this!" and from reading the book I knew that this was probably the transition part of labor which means it's about time to push!

Looking back now I think I may have been in early labor the three days before Eli was born. I had been having some contractions but figured it was just Braxton Hicks because they were pretty irregular and very low. I did look up one description of BH that said they felt like mild period cramps. These were NOT mild! Monday I was ready to have this baby (I did not enjoy being pregnant, more on that later) and started doing squats like crazy. Apparently this can help labor start. Tuesday morning (around 8:00) I was thinking about going to MOPS at our church but started having spurts of fluid escape randomly. I thought I had lost control of my bladder... Great, another fun side effect of pregnancy! I called Aaron to let him know, just in case this was my water breaking. My due date was the next day. I wasn't able to get ahold of my doctors office and was just going to wait it out. He suggested calling our friend Toni who is a labor and delivery nurse. She got back to me about an hour later (its about 11:00 now) and recommended going in to have the fluid checked in case it was my water leaking. She also said to make sure to bring our bags in case they kept us. This was the first time I realized that this could actually be it! I called Aaron and told him to come home and take me in. He asked if he should just meet me there, by then I was having pretty painful contractions so my response was "yeah, I don't think I should be driving..." I failed to mention that the contractions were about 5 minutes apart at that time. I started throwing my last minute items into my bag. By the time he got home I could no longer zip the bag closed. He started throwing everything but the kitchen sink into the car and then off we went! We left the house around noon (I think) and headed off. At one point we almost got stuck behind a train, but were able to re route another way. Contractions were VERY painful at this point, but I still thought they were Braxton Hicks because they were so low. Everything I read said that actual labor would feel higher on my belly. Aaron was keeping track of contractions though and was apparently going about 90 mph down the interstate when he realized they were about 2 minutes apart.

The scene of us arriving at the hospital was straight out of a movie. Aaron had about 4 bags around his shoulders (one of them wide open), threw me in a wheelchair, and went racing through the hospital. When we got to the labor and delivery wing they had us fill out paper work. Aaron was racing through the forms and one of the nurses says "Oh hunny slow down, you still have a lot of time." They then looked over at me and said "well lets take her back while you finish just in case." They took me to the first room (where they usually turn women away for not being close enough) and discovered that I was 8 cm dilated! Next I was whisked down the hall to the delivery room. Oh man was I in pain! I tried every position I had ever heard of to try and make it less painful, but nothing made any difference! I remember one of the worst feelings was that I couldn't get away from the pain. When a contraction hit, I tried to move and make it feel better but couldn't get away from it. The Bradley Method teaches relaxation during contractions which took me a while to figure out. Aaron was so so good. He kept trying to get me to relax, offered ice chips (not interested), a cool wash cloth (which felt amazing), and just offered support. When we were left alone for a few minutes he prayed over me which I will always remember.

Our doctors office has 4 different doctors who deliver and they alternate being on call. We had been seeing the certified nurse midwife Lauren and loved her. She said to have them call her when I went in labor to see if she was in the office. Luckily she was and was able to get away. I started feeling the urge to push before she even got there. She came and checked me and said I wasn't quite 100% effaced yet so not to push. (Aaron thinks that I was ready but that they weren't quite set up yet.) I knew it must be about time when she called down to have the pediatrician come. I remember looking up at the clock when she said it was time to push and saw that it was 2:30. I tried several different positions and then Lauren suggested the squat bar. They attached it to the bed and I used that for a couple of contractions. Lauren then said that the baby (we didn't know the sex at the time) was almost here and to lay back for the rest. I remember being really relaxed between each contraction, even looking outside and noticing how nice it was outside... I was totally not prepared for how hard pushing would be. This is unlike anything we would have done before and it took a while before I figured out what she was asking me to do. I really wish I would have done more exercise to be stronger for that. They kept saying how close he was and that it would be "just one more". I got a little discouraged when I wasn't able to push him out right away. Lauren did a really good job of stretching me so I wouldn't tear. I remember looking up at her between contractions and saying "OW!" She just looked back at me and said "I know." I wanted to punch her in the face! I am SO thankful now that she did though. I was so worried about tearing and needing stitches. She then had me reach down and feel his head (woah!) I got a second wind and Eli was born at 3:10 pm! They held him up to wipe him down which is when we both said "its a boy!" (We both thought he was going to be a girl...) He was put on my stomach and we both just looked him. Such an indescribable feeling. I was very overwhelmed and it all felt very surreal. I feel like "out of body experience" is the best way to describe the whole thing. I remember thinking, I just had a baby... It didn't feel real. They left him on my belly until the cord stopped pulsing and then took him off to clean him up. They gave him back to me all bundled up to try nursing. Aaron was standing there so patiently and I looked over and said "oh, do you want to hold him?!" Poor guy couldn't wait but didn't want to rush me. I was able to get up almost right away to take a shower. I did decide to get a shot of pitocin after he was born to help the placenta pass but that was the only medication I received.  I was SO sore. I definitely was not expecting that, although it makes sense considering what I just did. After I got cleaned up we were moved down to our recovery room.

Looking back on that day I'm surprised that I don't remember the day for the pain. It was an amazing experience and truly indescribable. Our lives are completely changed and I can't imagine our family without little Eli.


Coming next:  The first month with our little boy.

Posted by Unknown at 2:50 PM No comments: